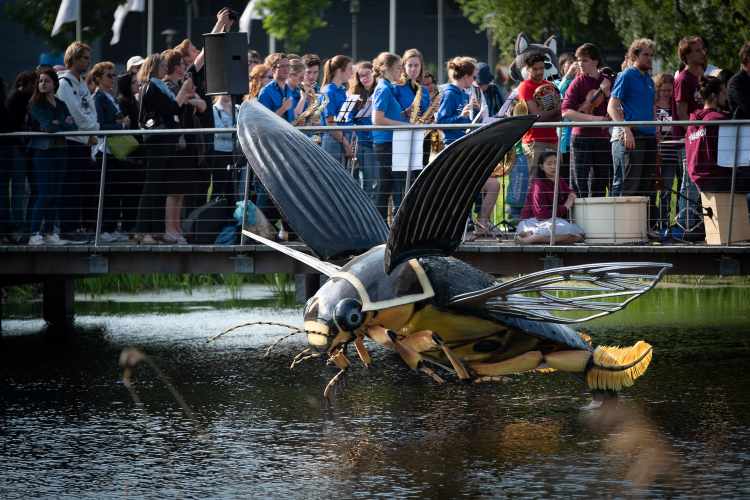 A good work of art doesn’t let you indifferent. It is hard to pass unnoticed, may touch you, may make you wonder, evokes associations that may be different for everyone. The title of this beetle, written under water in letters that light up in the dark, gives you a little extra push. “Must Leave!”   Why? One alumnus told us it made her think of the moment she had to leave Wageningen, to move to her first job. Leaving can be scary, but at the same time holds promises. Here is the association web of the designers of this installation Vagn Iversen (sculpture) and Marten Scheffer (conception):

Darwin was surprised to find the same freshwater animals across the world. Would this be because ponds are so ephemeral? Sooner or later drought or other trouble forces animals to migrate to a better place? Darwin was right. That is why this charismatic diving beetle has wings.

Societies are like ponds. Every once-a-while trouble hits somewhere forcing people to leave. The abrupt abandonment of Mesa Verde by the Puebloan people in the 1200’s, “the greatest vanishing act in prehistoric America”, happened upon drought, shortages, and violent conflict. Parallels between more recent exodus scenarios are not hard to see.

Migration creates tension but also catalyzes fresh visions. Baruch Spinoza, son of political refugees in the 1600’s, opened our eyes to the risk of dogma so profoundly that our highest national science award is named after him. This installation is an homage to thinkers that migrate between countries but also between ways of seeing the world: different cultures, branches of science and arts.

Ecology as a science kicked-off in 1887 through an inspirational essay “the lake as a microcosm”. The author Stephen Forbes describes the intricate web of underwater life inspiring a whole new branch of science. However, the prophetic final argument of his essay is only recently starting to reverberate: lakes can indeed be seen as small worlds – ‘microcosms’- reflecting many aspects of our society. The science on tipping points is an example. Demonstrated initially for lakes, it is now used to understand phenomena ranging from depression in humans to collapse of stock markets or entire societies. A small part of the Spinoza award for this work is invested in Must Leave.

The making of Must Leave!